Voyages is the first game published by Postmark Games, a new company formed in 2021 by established designer Matthew Dunstan, best known for his work on Elysium and Monumental, and Rory Muldoon, designer of Skora and Pier 18 and with a number of artist/graphic designer credits including Tinderblox as well as Skora and Pier 18. The aim of Postmark Games is to specialise in designing print at home games for everyone making them accessible with a minimal environmental footprint. We at Board Game Hub were very excited to hear of this venture and have been playing Voyages for a few weeks. Here's what we think! 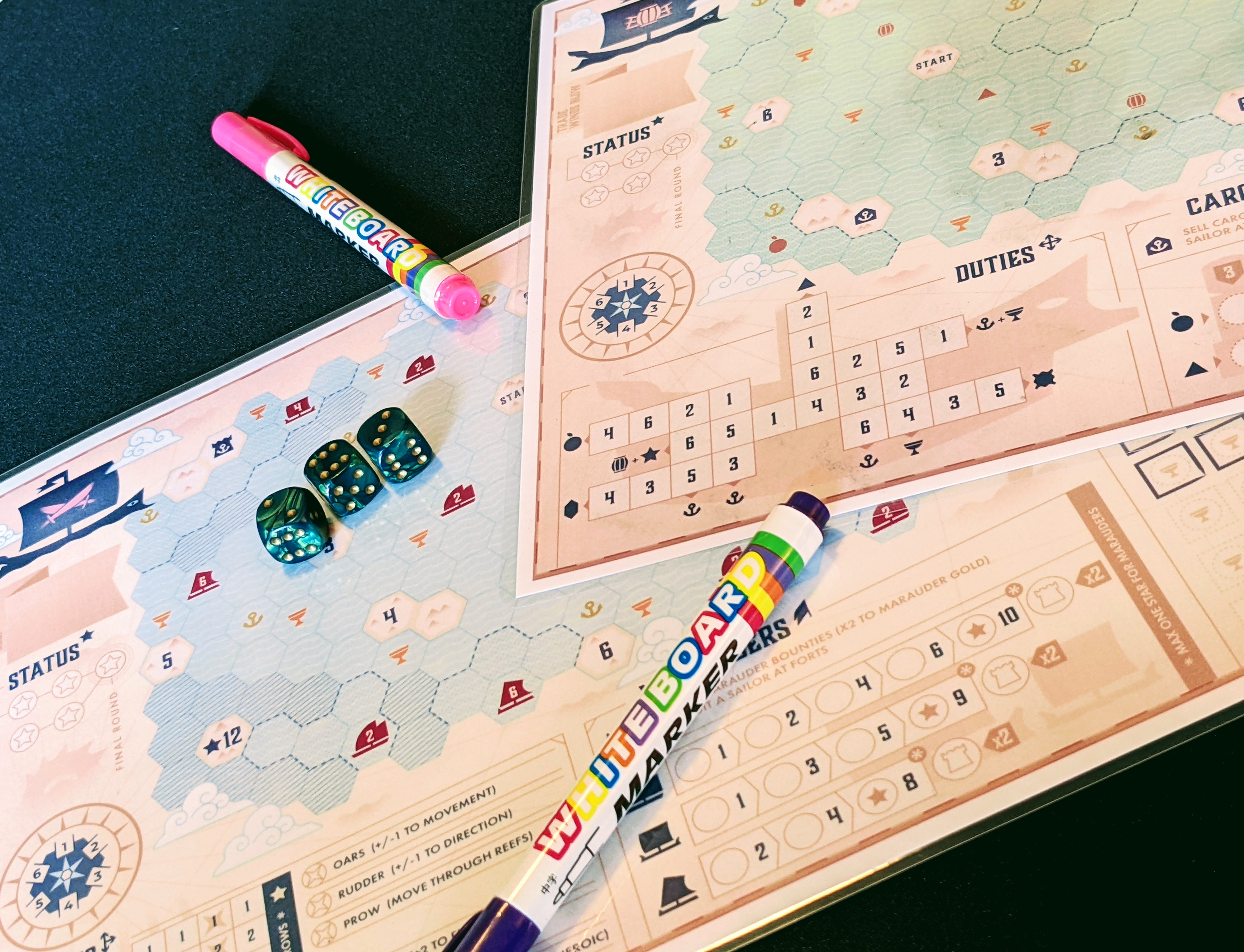 Print-and-play tabletop games have been with us for a while and they have a lot to commend them: no shipping or unnecessary components, cheap to make, cheap for the customer to buy (just £4 in the case of Voyages) and a minimum of storage space required. Despite that, I believe that print-and-play is still a niche within the greater niche; in a hobby in which many of the customers have expendable income, printing your own games could be seen as too much effort when going online or to a store and picking out a box with everything you need in it already is a bona fide option. Well, Voyages is so easy to "make" that I think you'd be crazy not to. Just head over to their website, buy the files, download them and then...

That's it. You're ready to roll!

Voyages is a "roll-and-write" game, a genre in which players will roll some dice and then apply the results to their own game area. It is also a "sandbox" game meaning that the players can largely do what they want within the framework of the rules. As such, the only real limit on the number of players is down to logistics; if you have eight dinner guests who might enjoy a game of Voyages after their puddings then you just need to print off enough maps. Or even better, invest in a small laminator, buy a few dry-wipe pens (or use some from other games on your shelf) and you'll only need to print once. Great for the environment and gameplay! Each map also has specific instructions for solo play. For me, this is a great multiplayer game because you're racing against your opponents rather than the game itself. If the dice rolls are a bit unhelpful for everyone then it doesn't matter, just go again.

In Voyages the players are captains sailing the seas, having adventures, exploring islands. According to BGG,

"On a turn, three dice are rolled for all the players. Each player chooses one die for the direction they are sailing, another for how far they sail, and the final die for crew duties aboard their ship. Players score points for visiting different islands, gathering and selling goods for trade, and training their sailors in case they come across the mysterious Dread..." 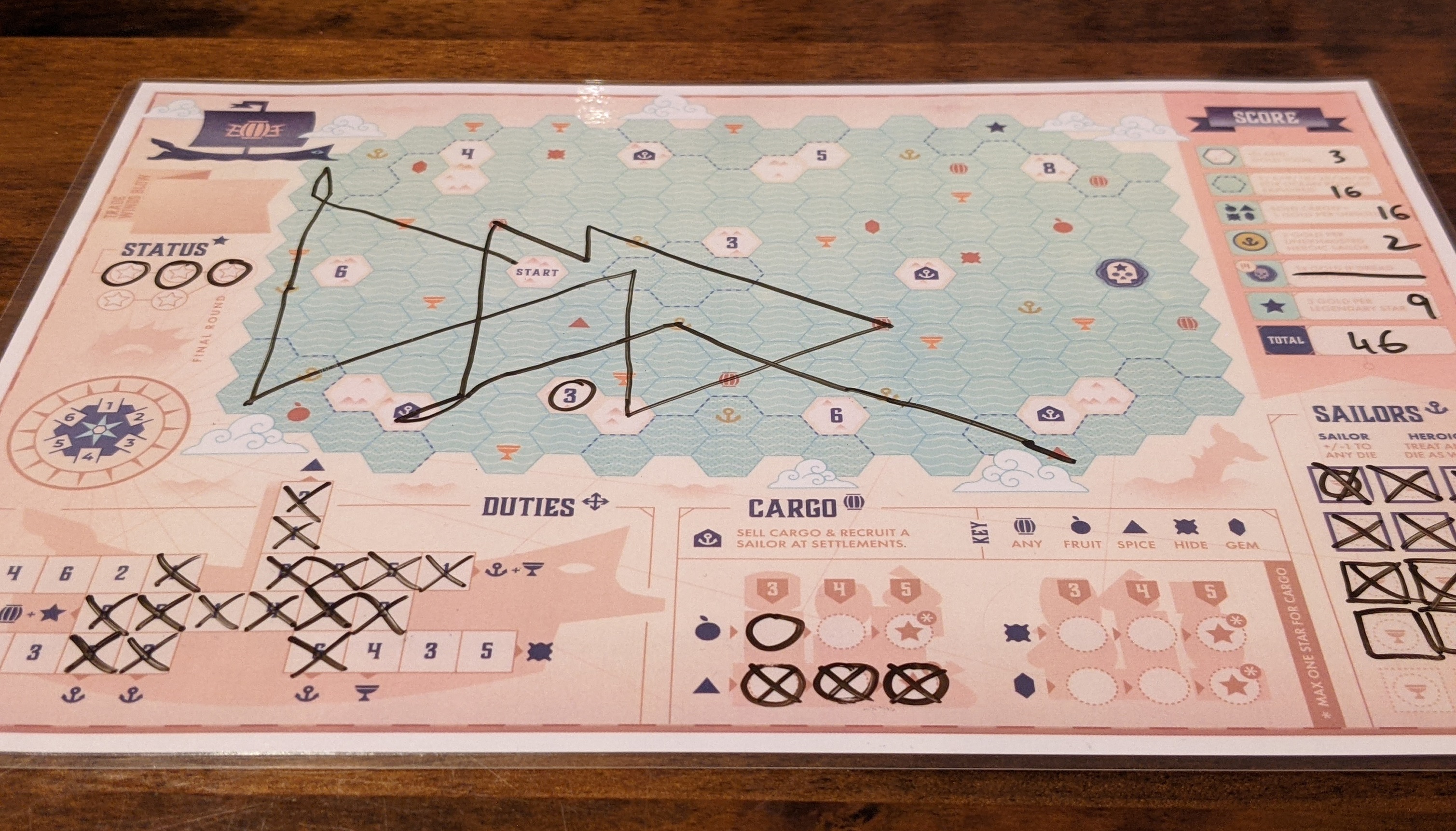 Everyone starts in the same place on their map but thanks to the randomness of dice rolls, players will soon be diverging as they seek their fortunes across the waves. The game ends when at least one player has achieved their third legendary star (with all players having one final turn afterwards) and there are a number of different ways to gain that legendary status. These are all detailed on the player boards and range from visiting remote ocean spaces, to selling goods to island natives, to defeating the evil Dread. At the end of the game, the players will score points in a number of different categories (including 3 points per legendary star) and the person with the most is the winner.

The solo player can choose their map and will then be faced with the challenge of achieving three legendary stars within a set number of turns. It turns an indirect race between players, in which all have to adapt to the same dice rolls but may be attempting different goals, into a direct race against the clock when efficiency is king. Voyages is all about making the best of the dice that were rolled, but the urgency created by the timer means, for me, that you're likely to attempt similar strategies each game in order to achieve the legendary stars in time so that loses a little bit of interest. The randomness of dice rolls can also mean that some solo games are harder than others purely down to unfortunate throws but I don't see a major issue there as it's very quick. The ongoing availability of mitigating poor results by exhausting sailors should also mean you can often accomplish what you really need to. Just don't tire out your crew too quickly or you might get stuck!

The game already comes with three different maps which not only provide different logistical challenges but also new rules and ways of scoring points. However, Postmark Games have also guaranteed to support the game with more content in the future that will be provided to everyone who's bought the original files for no additional cost. How many other companies provide free extra content? Top marks fellas!

Another roll-and-write in a sea of mediocrity

I'm a huge fan of the roll-and-write/flip-and-write genre largely thanks to the extremely quick setup, good value gameplay and small boxes. As such I've played quite a few over the years:

You won't believe how long that list took to put together!

They have ranged from absolutely tremendous top ten material (see: Demeter) to extremely disappointing, but the most damning analysis of the roll-and-writes that I've played is that most of them have just been rather...forgettable, unoriginal, dare I say dull? For instance, any design that is just a glorified game of Bingo, ticking off numbers on your sheet until someone wins, can take a hike in my collection. I want more; I demand better.

Some of the games listed above don't offer sufficient mitigation against poor rolls; a good game designer gives the player opportunities to achieve things even when the rolls aren't perfect and Voyages absolutely achieves this. There may be times when you're looking for specific dice results- and sailors can be exhausted if required to manipulate the dice- but in the main you're able to make a positive move with the dice you have. That means you're rarely wasting moves and thus the whole experience feels a lot more rewarding. I would put Voyages in the upper echelons of roll/flip-and-writes that I have tried so far because the game mechanics marry opportunity and challenge very nicely. You're given a lovely sea playground to run around in but specific objectives to achieve and so far we're having a great time with this one.

Definitely one to check out for anyone who likes the roll-and-write genre and more thematic experiences than putting numbers into boxes. The promise of future content (for no added cost) means it'll be fresh for longer. The replayability and decisions you get to make in the game are well worth the £4 for the files and very small amount of time putting your game together. Highly recommended!