Back in the heady pre-covid days of 2019, we attended conventions with tens of thousands of people with nary a facemask in sight and sat down with strangers to learn new games. I'd heard about Tiny Towns before heading to UK Games Expo in Birmingham, England and, honestly, thought it sounded awful; yet another pseudo-tetris shape-building box of boring nonsense in a pretty package. However, when you see the opportunity to sit down and have a game at a convention you tend to grab it. And what a piece of good fortune that was. Tiny Towns is proof that it isn't always possible to judge a game from photos or a list of mechanics. Sometimes the whole is greater than the sum of its parts. Sometimes. 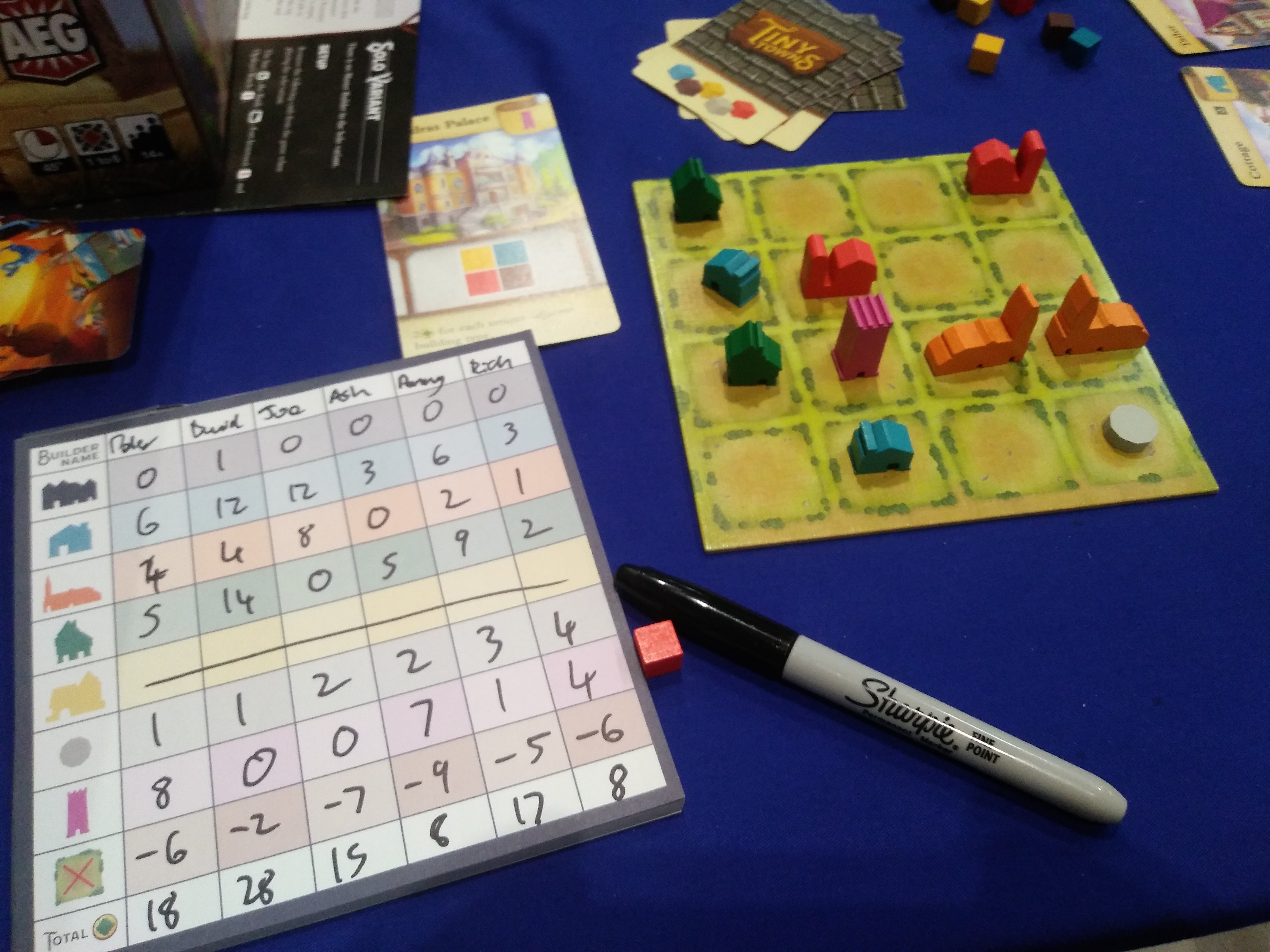 Please note that at the time of writing there are 2 full expansions and 1 mini expansion available. These will not be covered in this review as we have not played them!

After determining the starting player and giving them the Master Builder hammer, each player in turn names a resource- wood, wheat, brick, glass or stone- that everyone must take from the supply before placing it onto a space in their town. Once everyone's done placing their resources, they may construct 1 or more buildings that match the shapes on the building cards, trading in the required resources back to the supply and placing the relevant wooden building onto one of the spaces the resources previously occupied*. The Master Builder hammer moves clockwise to the next player and play continues. 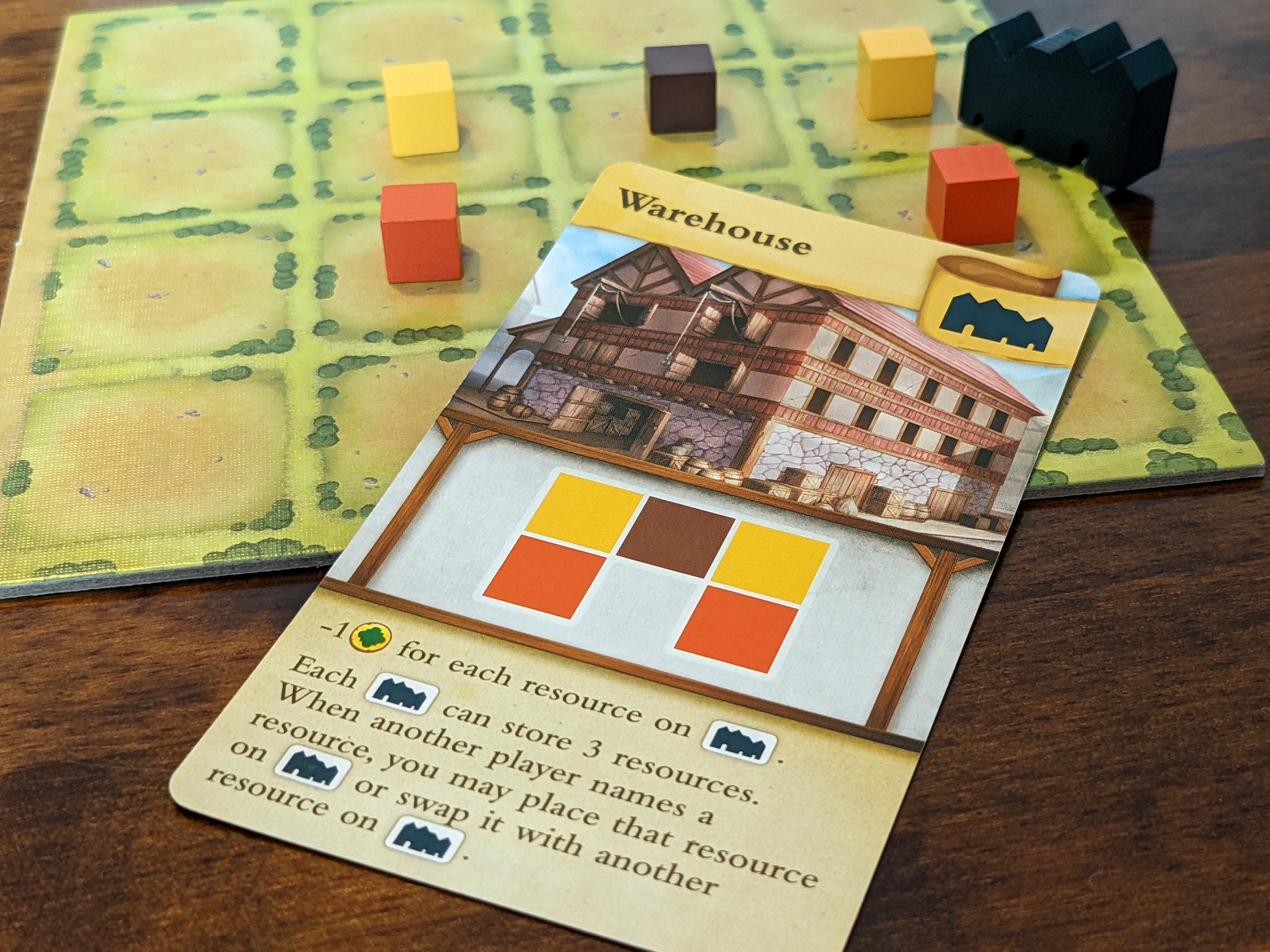 Aside from cottages, that give 3 points if fed, each building in play acts and scores in different ways. The red buildings feed cottages, for example, while others award victory points for achieving certain conditions. The challenge of the game comes, firstly, in identifying a strategy for the selection of cards capable of earning the most points and then in managing the continual flow of resources on your town board. Once a resource is placed on a space, it cannot be removed except when being used to construct a building. What this means is that every player is constantly and carefully planning where resources should go in order to a) maximise points and b) keep their board in as manageable a state as possible. It doesn't take many resources in unhelpful positions on a 4x4 grid to derail a game and leave a player effectively stuck. As with resources, buildings cannot be moved once played* so towards the end of the game everyone experiences the same challenge of trying to score as many buildings as they can with an ever-shrinking area of space in which to place resources and/or buildings. 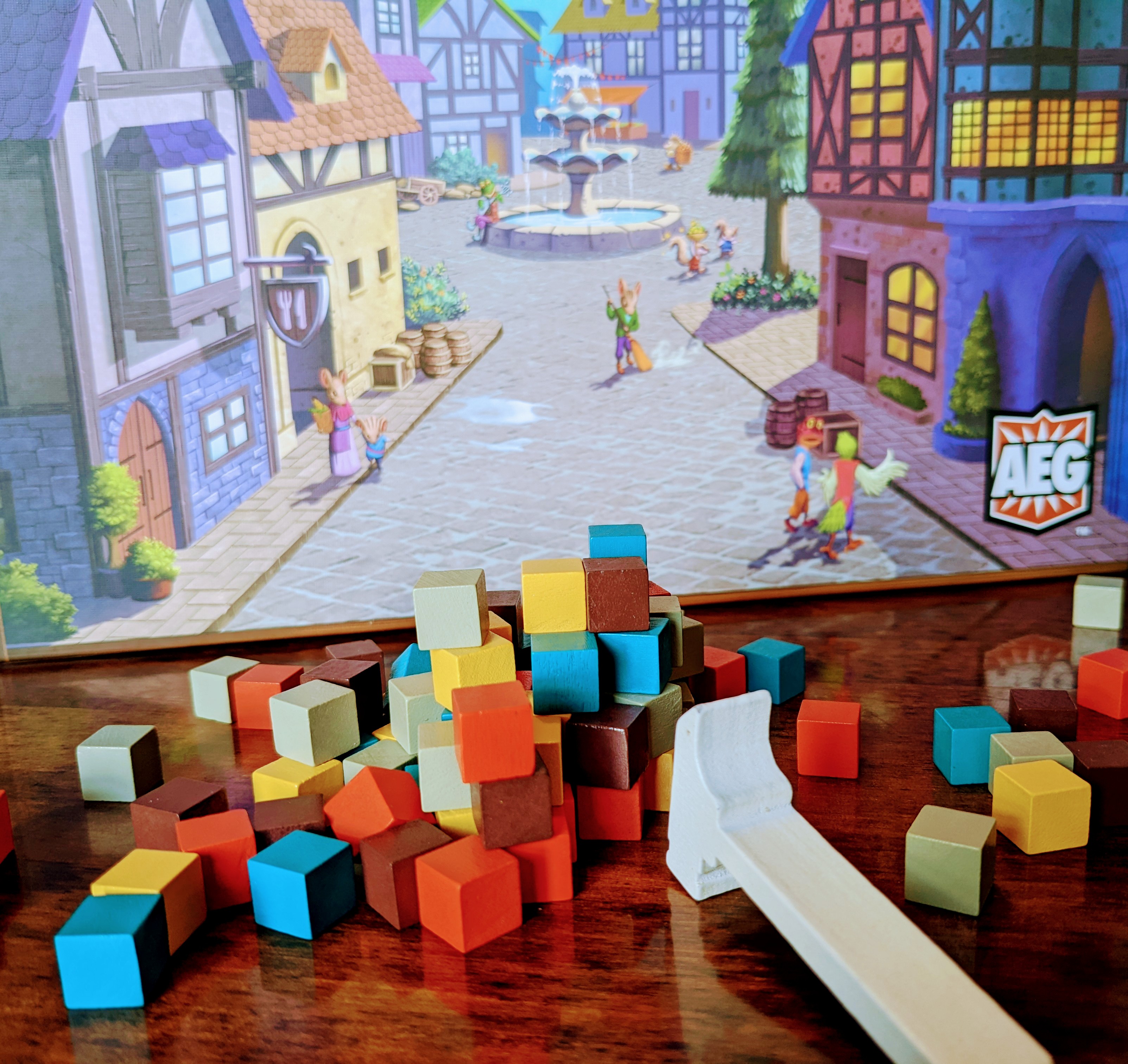 The game ends once all players have filled their grids with either buildings or resources. All spaces must be filled but any space with a resource on it at the end of the game is effectively worth -1 points. The players calculate their scoring for each building in play, plus any monument bonuses, removing points for spaces that held resources at game end, and the player with the biggest total wins.

*Note that there are ways to act against these rules but this largely depends on using a specific Monument's powers. We'll talk about Monuments later. 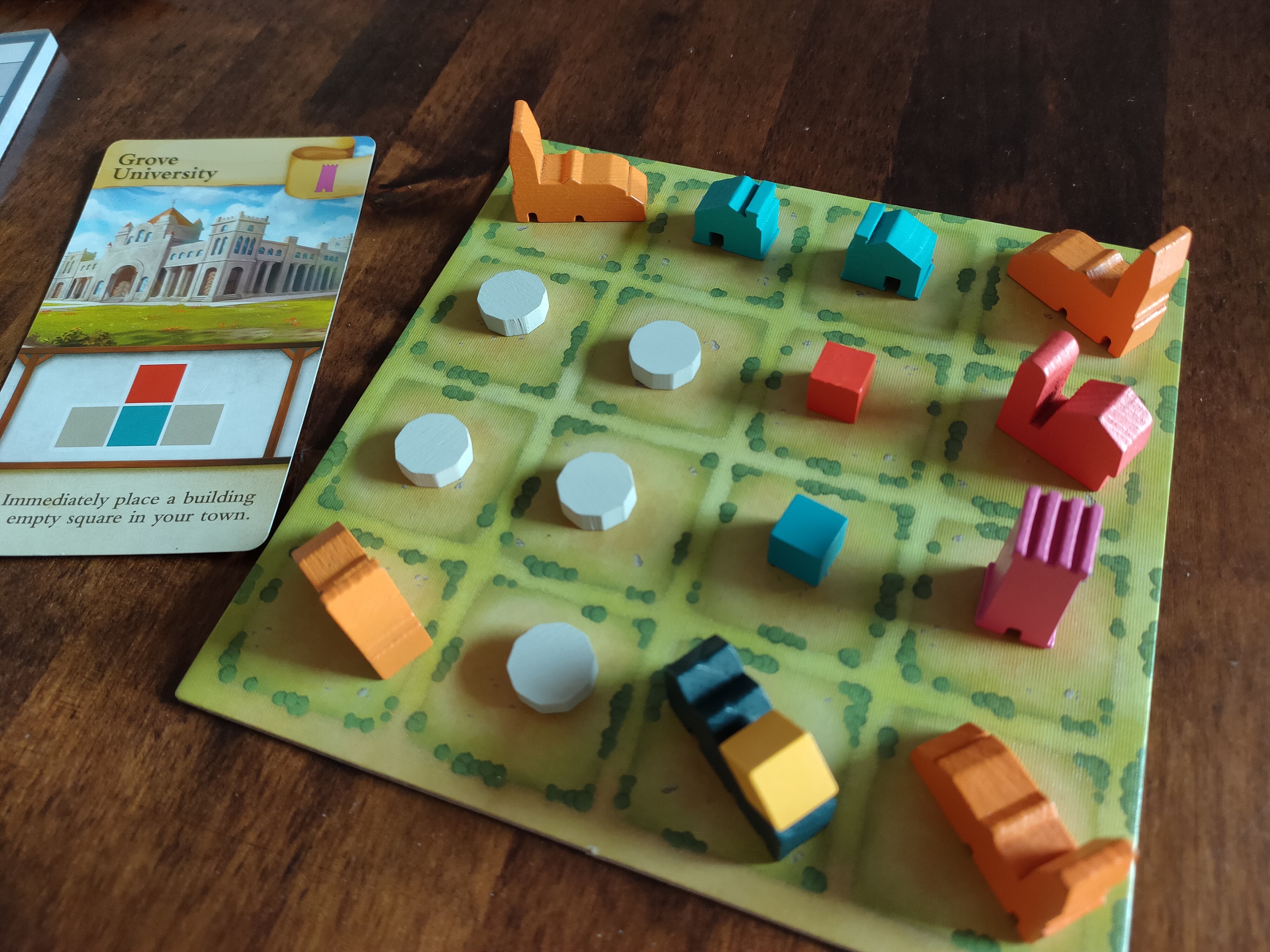 Tiny Towns features simultaneous play meaning everyone's busy all of the time and games fly by in a pleasing state of industry and purpose. No waiting for annoyingly long turns (aside from the very occasional blast of analysis paralysis as players experience the mental anguish of a game that's going south). This means that a 6 player game doesn't take appreciably longer than a 2 player game, something I find very rare in board gaming and which is a real bonus.

Aside from Cottages, which are consistent from game to game, and monuments, there are four variants of each type of building which can totally change the way the game will be played. This means that there is no one-size-fits-all approach to Tiny Towns and players must be adaptable in their tactics in order to win. It also means that after 22 plays, the game is still as fresh as it was on that first play at UKGE 2019 and I've seen no need to add any expansions to my box. (Of course this is also partly due to either lack of availability in the UK/prices that seem too high for expansions of this type. AEG have some improvement to make on both of these fronts in my opinion.) 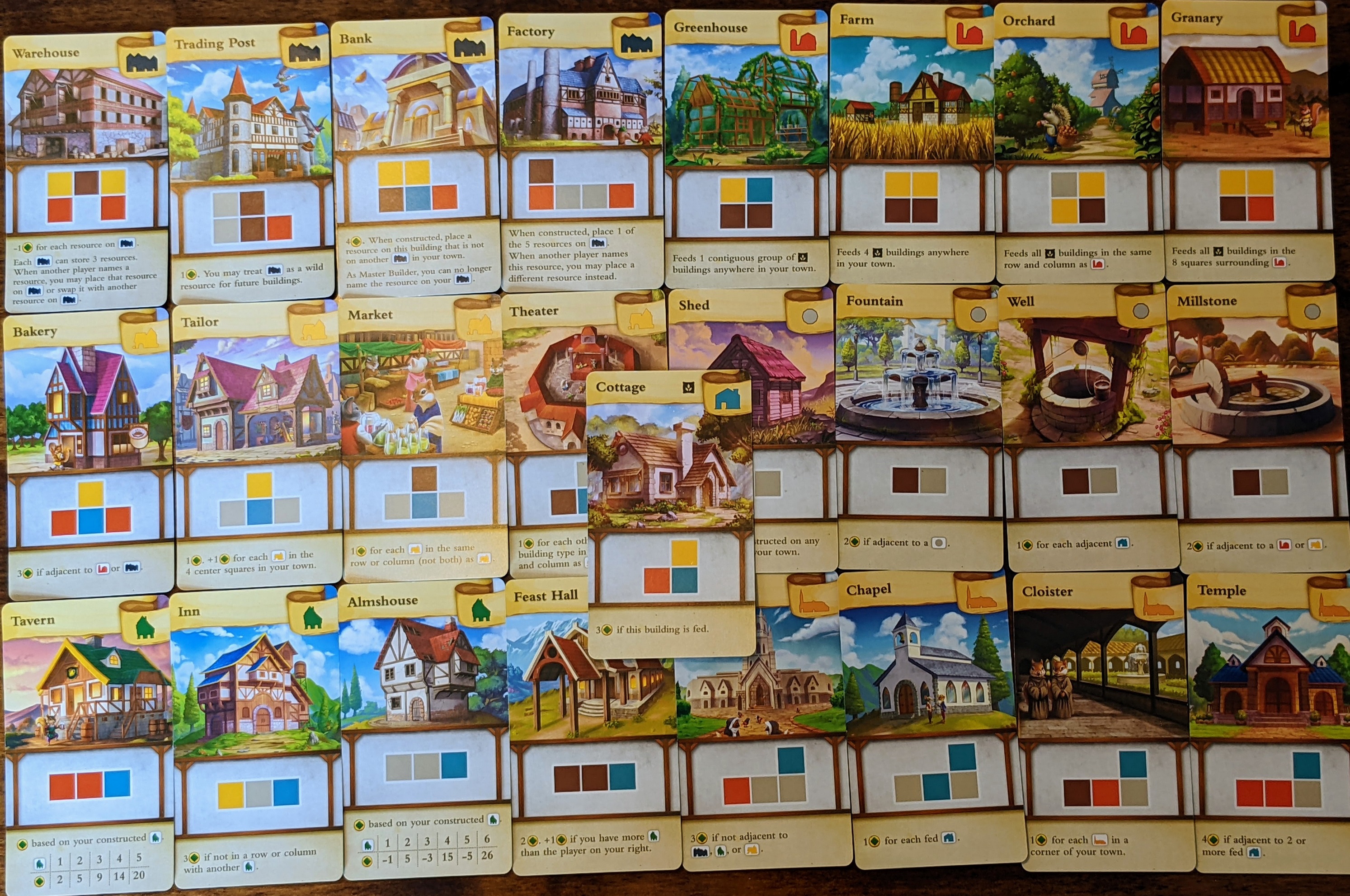 The random selection of cards during setup means that players regularly have to approach strategy in new ways in order to achieve the biggest scores. And of course each player must try to make best use of their Monument, a unique building with a strong power (or points value).

At the start of the game, each player is given a Monument piece and two random Monument cards face down, keeping one. The unwanted cards are returned to the box. Monuments are built just like any other building in that they have a set requirement and take up a space on the board as per normal when built. Some are worth lots of points while others change the rules a little giving the player a specific advantage in one area of the game. This selection gives yet more variability between plays and also a little bit of asymmetry which is valuable in a game in which players receive (almost) identical resources throughout. 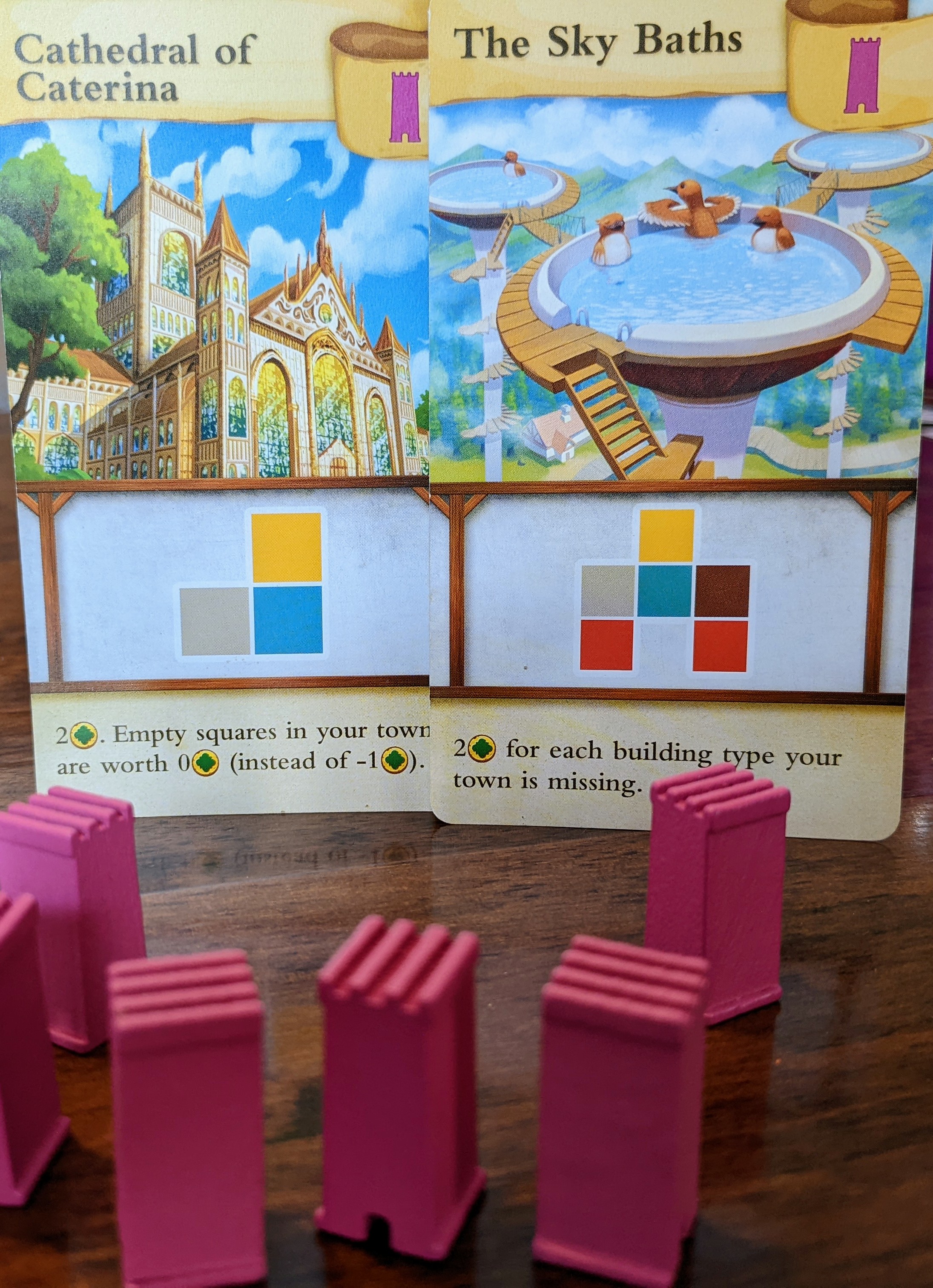 The solo game is a VP-target affair in which the player is striving for maximum efficiency from the buildings available to them. Instead of a Master Builder naming resources, the Resource deck is used to provide randomness. The resource deck is made up of 3 cards for each type of resource. On a turn, the player reveals the top 3 cards and chooses one to use before placing it on the bottom of the deck. Aside from certain building and Monument cards being removed from the solo game, play proceeds in much the same fashion as in multiplayer games as the player attempts to manage the semi-random stream of resources to the best of their ability. The feel of the game does change a little bit, however, as you are afforded more control by picking 1 from 3 resources each turn. This doesn't make the game as easy at it sounds, however, as you are likely going to be forced to diversify enough in buildings to make sure you don't end up getting stuck refusing certain resources. Refreshing the 3 resources on offer is important as there is no shuffling of the resource deck once the game starts. If you take 3 glass in a row then, when you get through the deck, you'll find yourself faced with 3 glass again. Make sure to give yourself options!

At UKGE we were taught the game using the Town Hall rules which also makes use of the resource deck from the solo game. Instead of a Master Builder choosing a resource each turn you instead reveal the top card from the resource deck. All players must use the resource as per normal. A second resource is drawn and, again, all players use the resource. Then, however, every player gets to choose the precise resource they would like. What this means is that 1/3 resources throughout the game will be chosen by you and it is a more forgiving format that you could potentially use for non-gamers or younger family members. I prefer the extra strategy and tactics provided by the Master Builder mechanic as knowing when to clog up an opponent's board is a skill to be exploited; it is a little more in-your-face than the Town Hall version, however, and this might rub some players up the wrong way. 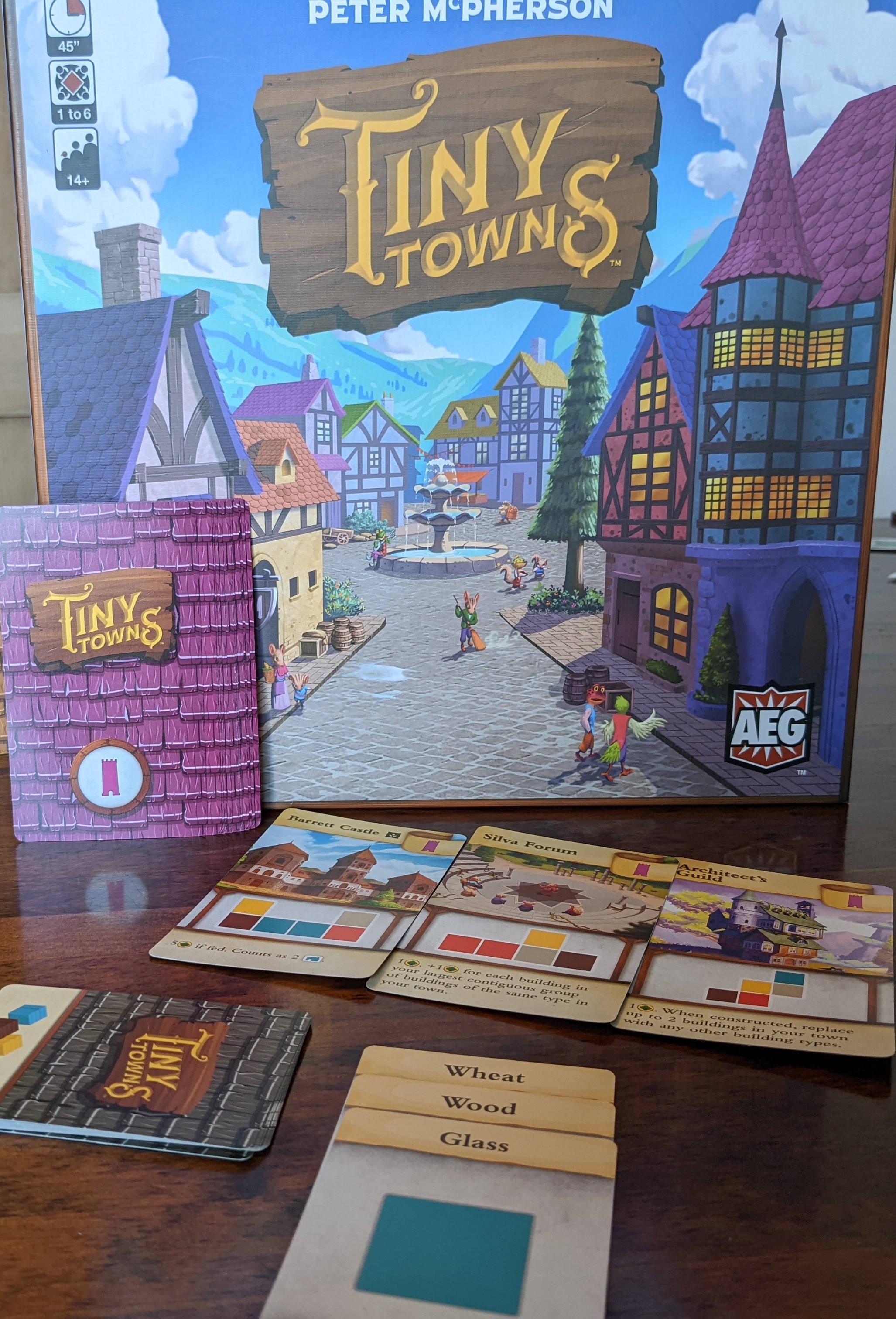 After nine years this hobby can still surprise you. I am not a big fan of visual puzzle games largely due to the fact that I quite literally cannot visualise. You wouldn't believe how my mind was blown when I found out that other people could see pictures in their head or with their eyes shut. It means that even simple children's games can be bewildering to me if I simply cannot figure out how a pattern or sequence is going to change. Tiny Towns is, however, most forgiving for someone like me as the buildings are largely simple to translate from a card to your board and the fact that players are able to freely rotate/mirror patterns as long as the arrangement of resources stays consistent with the pattern on the card. I absolutely love the Master Builder mechanism for all of the interaction and tension it provides and the fact that this is a simple gamer's game that can play up to 6 in well under 45 minutes whilst still providing masses of tactics and strategy to explore. I would recommend Tiny Towns to virtually anyone because of how it caters to different kinds of groups and, in the UK at least, is available for around £30. What an absolute bargain.