One of the most exciting times for a game designer or publisher is that moment when you actually get your hands on a physical prototype that looks vaguely like the product you're hoping to release. Of course designers generally work with physical prototypes from the initial concept- often in addition to digital testing later on in the process- but they're generally a far cry from a finished game and are more functional than beautiful. When we were building up to our Kickstarter campaign for the original Tranquility, we knew that Dice Sports were going to be manufacturing not only the prototypes but also the final product. As such, the boxes that arrived on my doorstep were at least 95% the finished article and any changes would be fairly minor.

This time around, things are rather different. Rob Butler is again making our prototypes, but the final product is going to be manufactured by LongPack Games in China. Add to that a bit of anxiety about the nature of the physical components in Tranquility: The Ascent, specifically the diamond-shaped cards and how they work together, and it's clear that we'll be making more changes between prototype and final product this time around.

Here you can see the digital version of our prototype on TTS. Not pretty, but effective. And the game is being played with standard-sized playing cards albeit with a horizontal orientation. That's how we assumed the final product would finish up, but rectangular cards put together in a pyramid shape has a problem: no clean edges. From a gameplay perspective, that's not really an issue, but from a visual angle that's seriously problematic. This is a card game- it has no board- and the artwork on the edge of the pyramid with rectangular cards just sort of...ends.

In comes Tristam Rossin, the hero of the hour and salvation of all things Tranquility-related. "Why don't we use square cards as diamonds instead? Then when they're put together they form a clean mountain shape?

Perfect! Visually the game now looks great and we get to feature Tristam's lovely artwork on cards that fit together very nicely to form a mountain shape. Happy days. Except...we haven't tested the game with diamond-shaped cards. How easy is it going to be for new players to understand? Is it going to be awkward holding the cards that way round? Well, obviously this is what playtesting is for, and of course prototypes, and while the game is perhaps a little more difficult to get to grips with at the start, those who have tried it out feel pretty happy with it! We have a few things to work on- smaller cards, shifting numbers to the left-hand side as most people are right-handed, underlining 6s and 9s etc- but the pay-off for the artwork and the pleasing nature of the completed pyramid makes the style of cards worthwhile, and most appropriate, in our eyes. We hope you agree.

We aim to launch on Kickstarter on 28th June and with all fingers crossed that the UK Games Expo goes ahead on 30th July - 1st August, please come along and demo Tranquility: The Ascent with us at our stand. 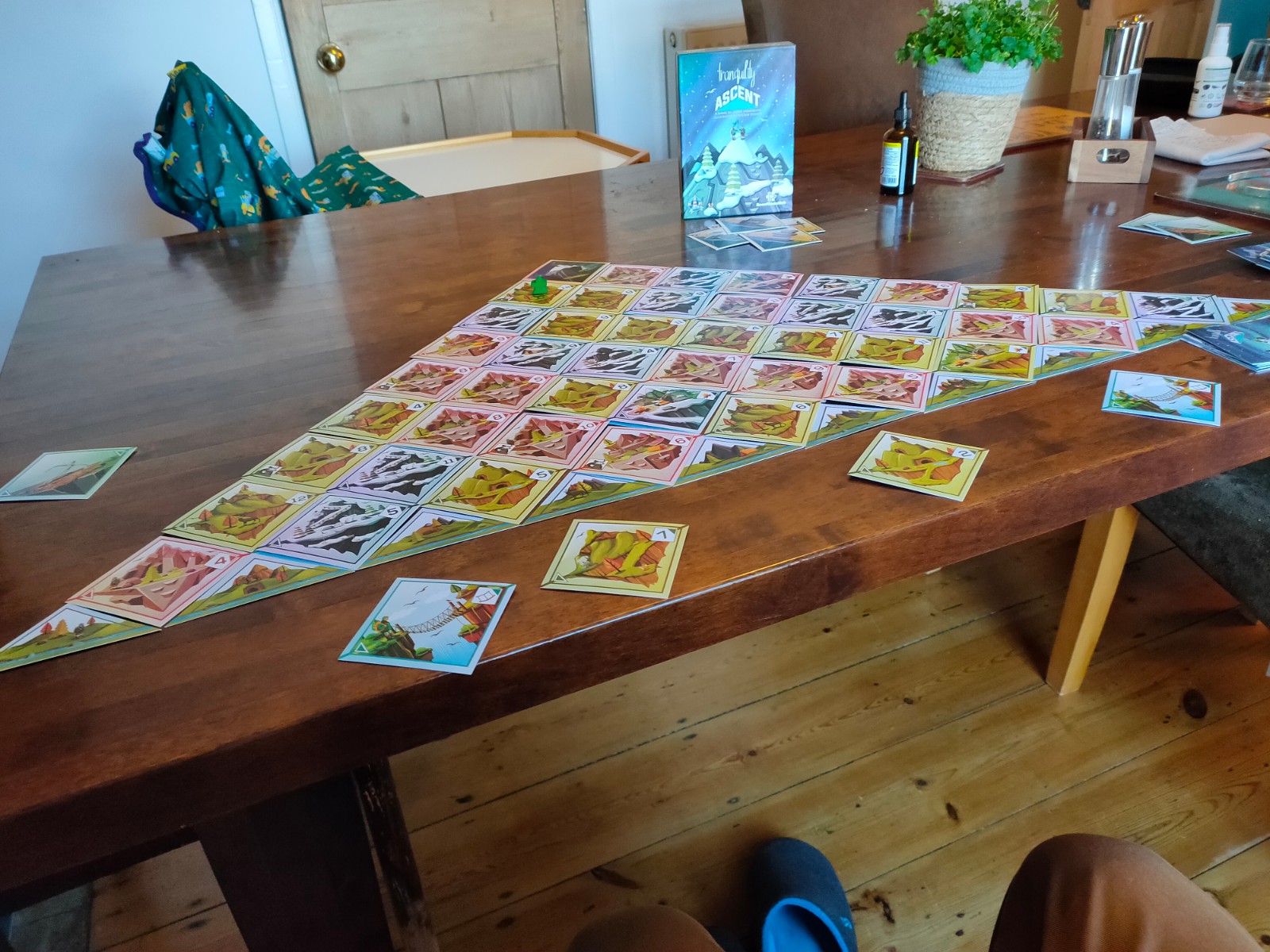