I was browsing Board Game Arena the other day, looking for something new to try that I could realistically learn by myself in a few minutes online, and I couldn't help but be attracted by Happy City. I mean that is surely something that only the grumpiest curmudgeon could refuse to look at. It turns out to be a very light drafting and tableau building game that's clearly aimed at younger gamers. The art style is cutesy but very attractive, in my opinion, and the game design is very clean. 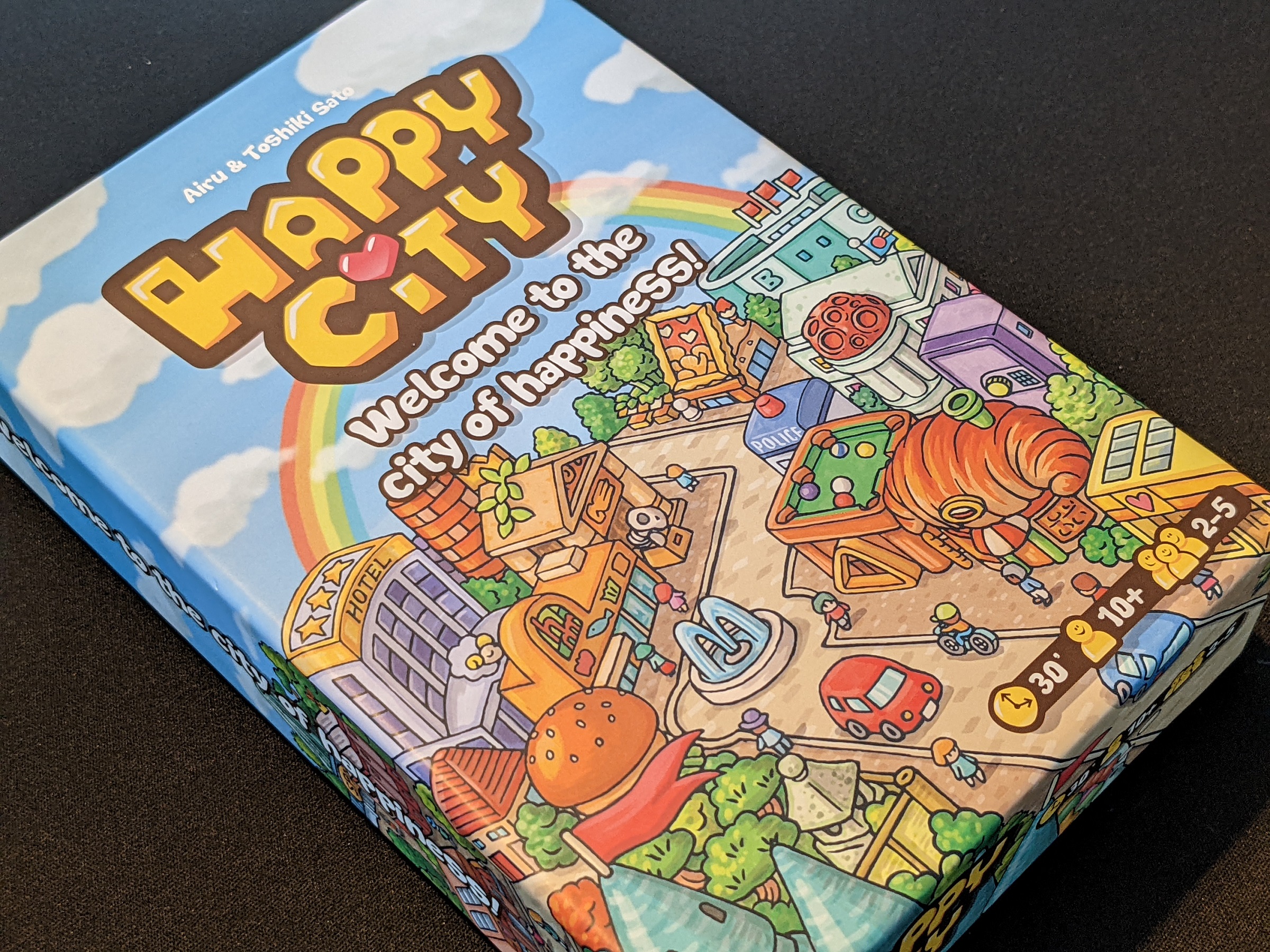 The purpose of the game is to make your population the happiest vs the other players. Your score is measured by multiplying population and happiness together which generates your final score. Each player starts with a Happy Market card, which generates one income. Each round all the players receive the total income from cards in their tableau and then, in clockwise order from the starting player, each player may optionally discard a face-up card from the central area and then must draw cards from one or more of the three face-down decks until 3 cards are revealed. They may then purchase one of these cards and add it to their tableau. They offer different combinations of population, happiness and income and their cost is noted in the top left. If the player cannot, or does not want to, take a card from the central area then they may instead buy a Dwelling; these are set in number at the start of the game and once they're gone, they're gone! If they can't or don't wish to do this either then they may take a coin. And then it's the next player's turn.

Play is fast and breezy but every round the active player is faced with interesting decisions. Firstly, do I discard a card? Weighing up what's not useful to you vs what might be useful to other players vs what might come out instead. Secondly, which deck should I draw from? Each deck is made up of cards of different costs, 1-3, 4-5 and 6-9, and different distributions of colours. Thirdly, would I rather increase my income for later rounds or spend money now to get ahead on population or happiness?

The last kind of card is Special Buildings. The game comes with 18 different cards for the family version plus another 38 for the expert game (more on that later). Once in the game, each player may also take a Special Building from the face up selection (a set number of random cards laid out at the start of the game) if they already have the requisite colours in their tableau- this is a nice bit of set collection and provides another decision space as to which cards will be most useful for claiming a Special Building. The Family version cards simply provide another combination of extra income/population/happiness but it's important to claim one of these cards or you'll likely be up against it to claim the win. The Expert cards offer a bit more in terms of variety and strategy which we'll cover below.

The game ends when the first player has a total of 10 cards in their tableau. All players multiply their population and happiness together and thus the winner is determined. The game length is pretty short; for us, with 3 players, we've been comfortably under the 30 minutes suggested by the box, close to 15 minutes I'd say, but appreciate that it would go a bit longer with the full compliment of 5. It certainly doesn't outstay its welcome.

Included in the box is one modification for a more advanced game, though to call this "expert" is perhaps a touch hyperbolic; the game is still incredibly simple. Put back the 18 Special Buildings from the Family game and instead reach for the 38 expert Special Buildings. They offer more interesting perks such as income based on the cards in your city, money bonuses when your "neighbours" perform certain actions, extra endgame scoring (if the criterion is met), cards that score based on adjacency in your city...etc etc. If you were playing with gamers then I'd suggest that using the Expert cards was an absolute no-brainer; for me, it is a useful way of adding variety and more challenge when younger gamers start to pick up more strategy. Our near 6 year old is enjoying Happy City because it's accessible and fun and one day she'll be ready to take it up a notch with the Expert cards. But don't go thinking that the Expert cards make this into a serious gamer's game; it definitely isn't that!

After one game of Happy City on BoardGameArena I started looking for a copy and bought one from a seller on BoardGameGeek. In the UK, at the time of writing, there are now plenty of copies out there at multiple retailers online so ask your favourite shop about Happy City if you like the sound of it. We can certainly recommend it, particularly for those with younger family members or people who like a quick game with interesting, but not exhausting, decisions.