“Doctor Esker has vanished, leaving behind only a mysterious book full of puzzles written in his own hand. Are you up to the challenge? This box holds 73 cards with nine devious puzzles to solve. You can play them solo or together with family and friends. Great for a party, a game night, casual coffee table play, or a lazy afternoon.” Does this sound like something you might enjoy? Well, we put it to the test so carry on reading to find out more.

For full disclosure, I received a free review copy of Doctor Esker’s Notebook from the designer, Dave Dobson, of Plankton Games.

There will be no spoilers; that’s going to be…interesting from a reviewer’s perspective. It is available direct from the Plankton Games website for $14.99 including free shipping to the US. Copies can also be sent elsewhere in the world for an extra cost e.g. $26.99 total for a copy sent to the UK. Citizens of other countries can get in touch by emailing dave@planktongames.com and asking for a quote.

Doctor Esker’s Notebook comes in a standard deck of cards-sized box with standard tab opening at the top. Open it up and you’ll find a couple of cards with instructions (in lieu of a rulebook), solution cards (numbered 0-9), 9 decks of a variable number of cards for each puzzle (with a different picture identifying each set), a hints card with internet link and QR code (if the players need help) and a ‘Hall of Champions’ card to record your experience with the game before passing it on. If it wasn’t clear already, this is a one playthrough kind of deal so pass it on to your friends after you’ve finished it and see who does the best! 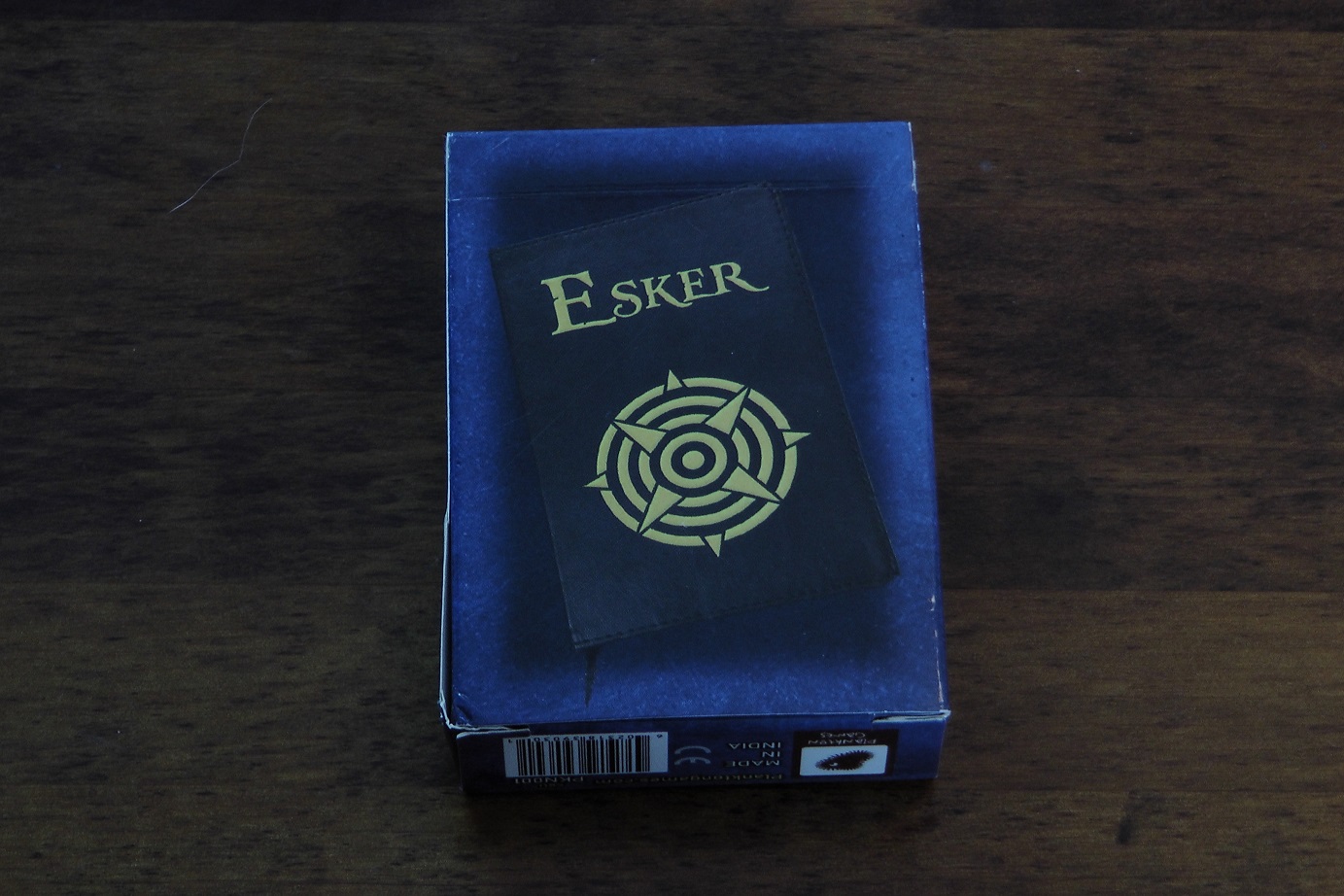 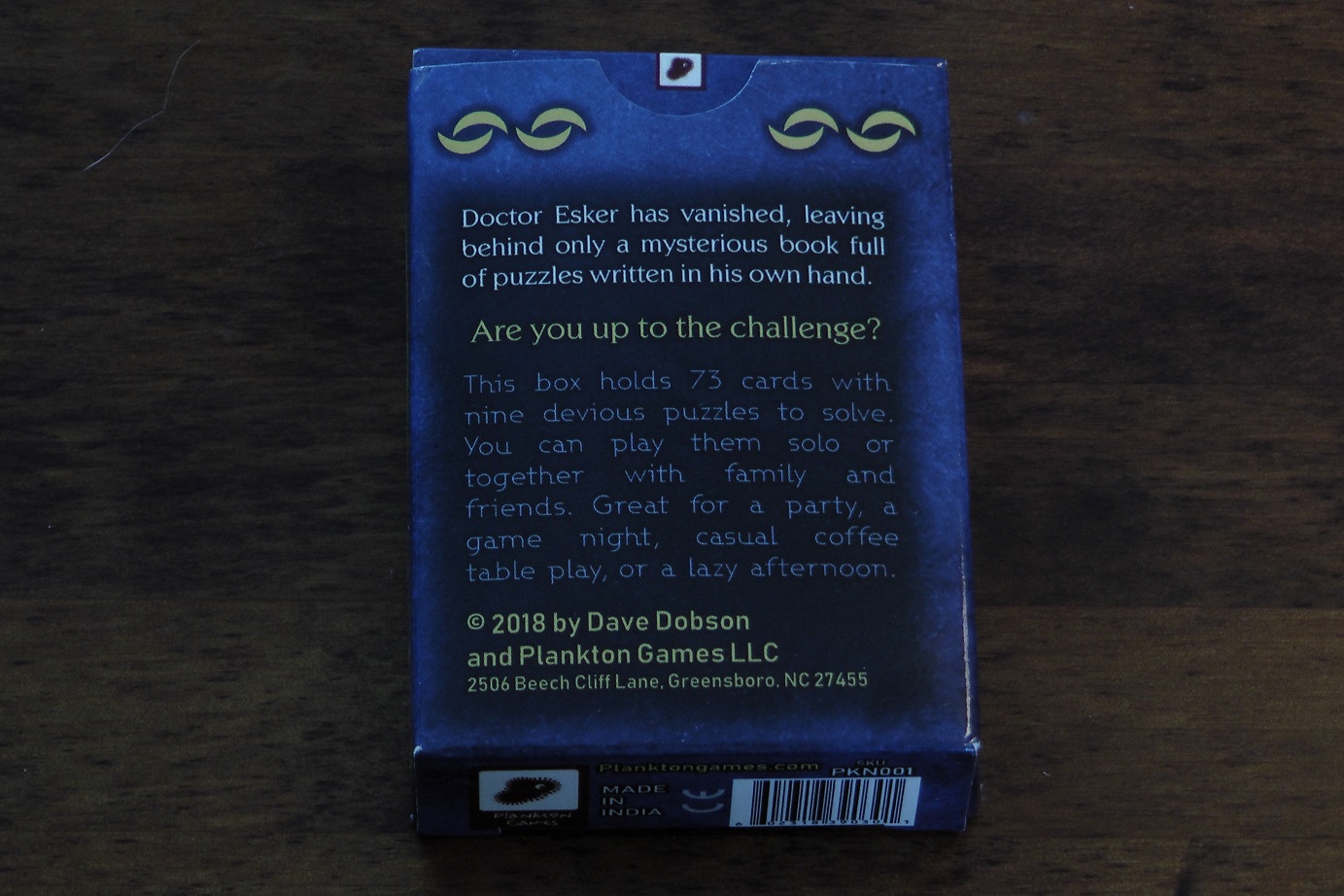 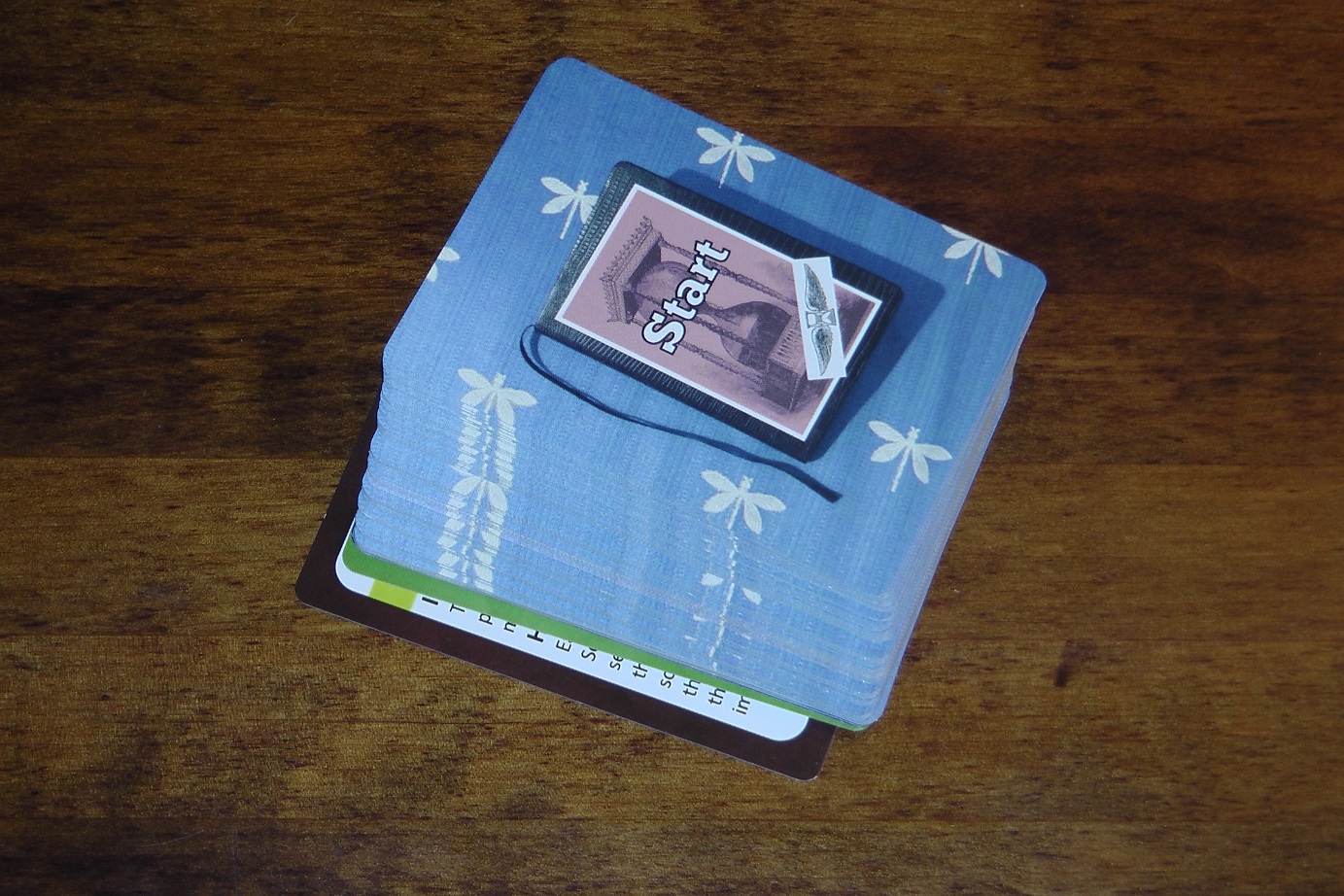 The first puzzle is the ‘Start’ set and is comprised of 3 cards. Turn them over and work out what on earth that crazy Doc was talking about. This opening puzzle is the only one I’ll describe with any kind of specifics because you’ll see them from minute one. They consist of several words, numbers, pictures and lines. Players will now think out loud, try to see patterns, move them around searching for meaningful configurations, postulate on the possible meanings of the words, link together numbers and see if they create meaning...it’s basically an advanced cryptic puzzle where you have no information except for what’s on the cards, with the exception that the “solution” will consist of numbers. When the players think they have the solution, they find the corresponding solution cards, turn them face up in the right order and see if there’s a message revealing what’s going to happen next. If there is, they move on to the next puzzle. If not, back to the drawing board. The start puzzle was only three cards and presumably designed to be the simplest to solve. There were four of us playing and it took us a mere 8 minutes. So far, so simple. The next puzzle took us 10 minutes and was a fairly straightforward visual problem to solve. 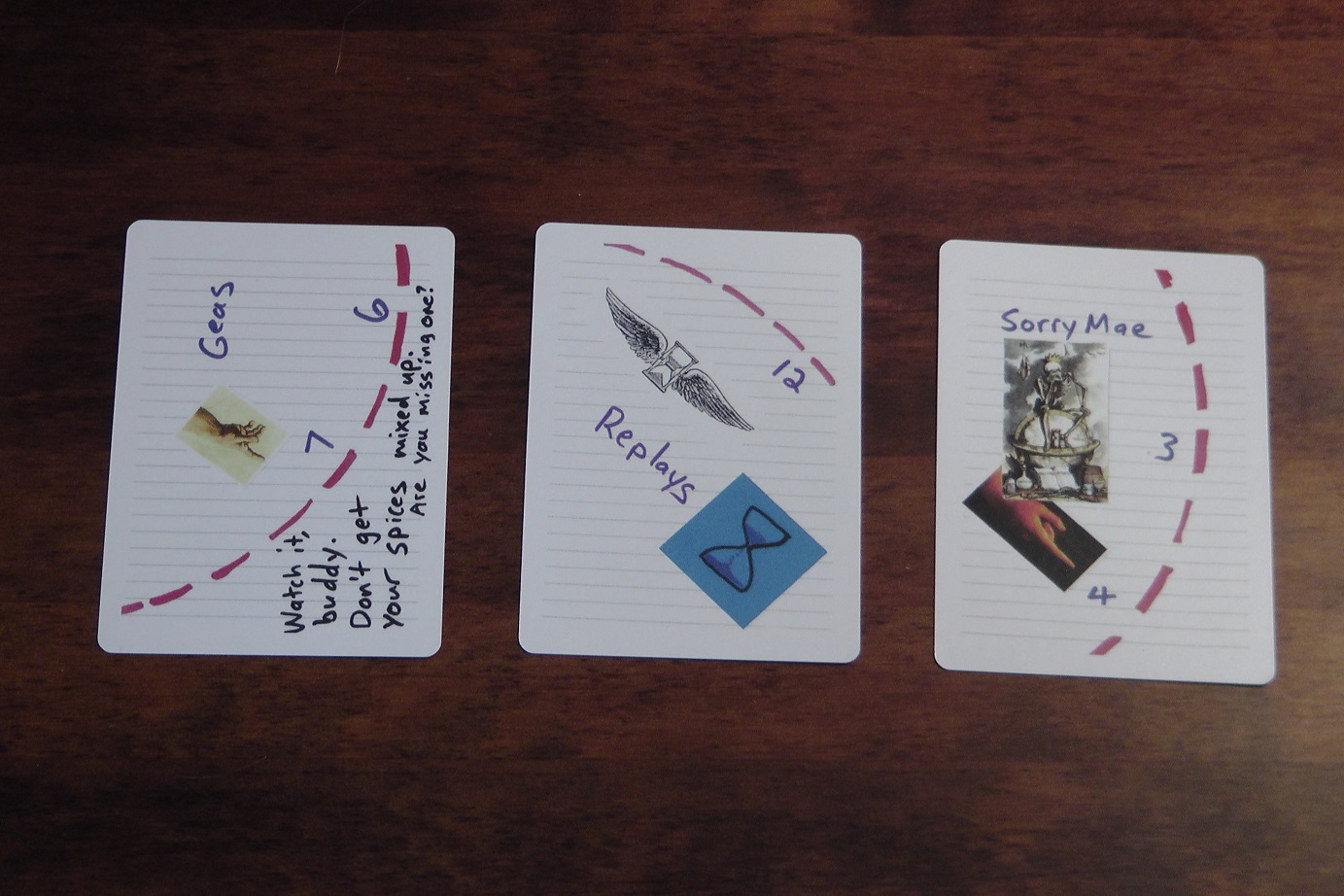 15 minutes into puzzle #3 and we started looking at the hints. Each puzzle has 9 hints: 3 small, 3 medium and 3 large. This is a nice feature that makes it easy for players to decide how much help they need. It took us a further 25 minutes and all nine clues to finally figure out the answer. We weren’t helped by a small inaccuracy on one of the cards which, to us, looked like an error but could also be described as ambiguous. Trying to figure out solutions to cryptic and obscure riddles is hard enough without printing issues making things even more difficult.

Puzzle #4 took us another 45 minutes and we started looking at the hints after 10 minutes. Our patience threshold was obviously decreasing as time went by. Now, the rules do say that it is recommended to use a 5 or 10 minute timer and, if no progress is being made, look at the hints when the timer runs out but I’m not sure how I feel about this. There were four of us playing, all of moderate intelligence, and we just weren’t able to make certain connections. I expected that between the four of us, we’d have different strengths and weaknesses and each player would have a moment to flourish, a moment when they saw something that nobody else had. This did happen, but there were also frustratingly long spells of no breakthroughs whatsoever. I understand that the game is intended to be a challenge, but there is something deeply satisfying about figuring out puzzles yourself. Correspondingly, it is less than satisfying to need not only gentle nudges in the right direction but sometimes huge pointers to get absolutely anywhere. Part of our issue with this particular puzzle was that it required very American-based knowledge. I’ve been frustrated in the past by games, such as Wits and Wagers, that are just too American-focussed. There seems no need to alienate players from Europe and Asia, for example, by asking questions that only people from North/South American would likely know the answer to. Of course, at the time of writing this review the game is only on sale in the USA so you could justify this potential flaw by pointing at the intended market. However, in my opinion this just seems unnecessary and damaging to the game and therefore the company. I just wish that Americans would have a more global outlook in all aspects of life, including board games. And that was enough for one evening. We’d completed 4/9 puzzles in approximately 1.5 hours with four players. We’d had fun but the enjoyment level plateaued and then receded.

Next day, it’s just the two of us. Puzzle #5 took 40 minutes and that was with an early breakthrough. The puzzles often have a bunch of information in varying forms e.g. numbers, words, lines, colours, pictures etc and buried within this will be a hint or two as to how to solve the puzzle. The hints are also extremely cryptic, sometimes helpful but often a part of the frustration. We ended up looking at all of the easy and medium clues; a lot of the time we’ve figured out most of the hints already but are missing one vital clue that, in retrospect, seems almost impossible to have worked out by ourselves. If I had to describe my thoughts on this game very simply, I would have to say that it’s just too hard. Games that offer a real challenge, whilst allowing the players to succeed and feel like it was their cleverness that achieved the victory, are wonderful to experience. Inducing four educated adults to start questioning their intelligence, after they’ve been blankly staring at cards for 15 minutes, is unfortunate and not what I would be hoping to achieve if I were the designer.

Anyway, moving on…puzzles #6 and #7 were completed in 20 and 30 minutes requiring six and nine hints respectively. I had developed a headache by this point and we decided to leave the last two for another day when our brains had recovered a little! 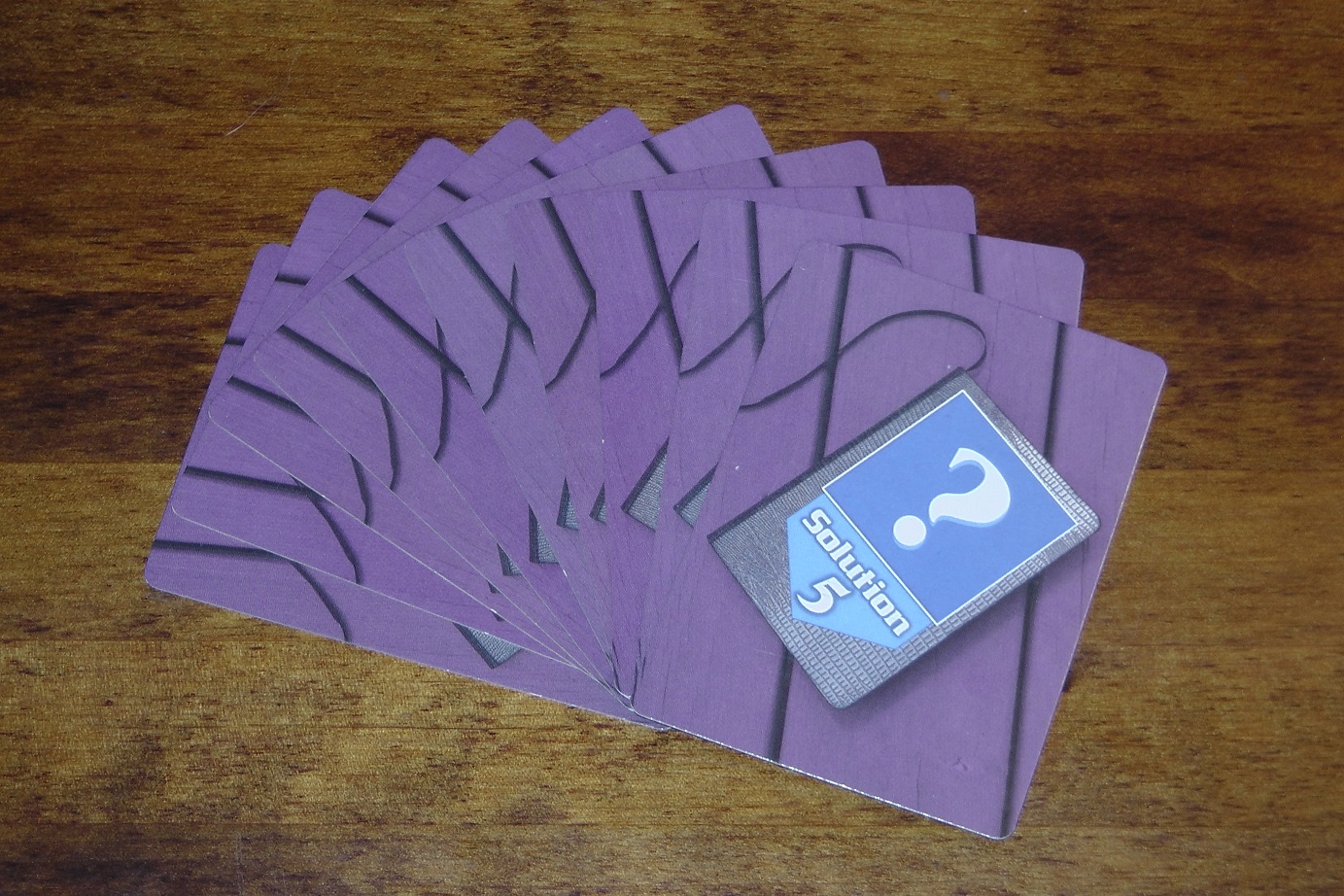 Fast forward a couple of weeks and we attempted the last two puzzles with another couple so we were back up to our original player count of four. The ‘Start’ puzzle acted as a nice little tutorial so that our friends weren’t coming into it completely blind, then we cracked straight on with puzzle #8. After a while with little progress we took a look at the hints online; as we have usually found, we’d worked out most, if not all, of the small and medium hints ourselves but had still hit an impasse. With two of the large clues we finally made the last breakthrough to solve it in just over 15 minutes. On to puzzle #9 and the largest number of cards by some margin filled us with some trepidation! It took us just over 20 minutes and one clue, but without that clue we may never have solved this one. 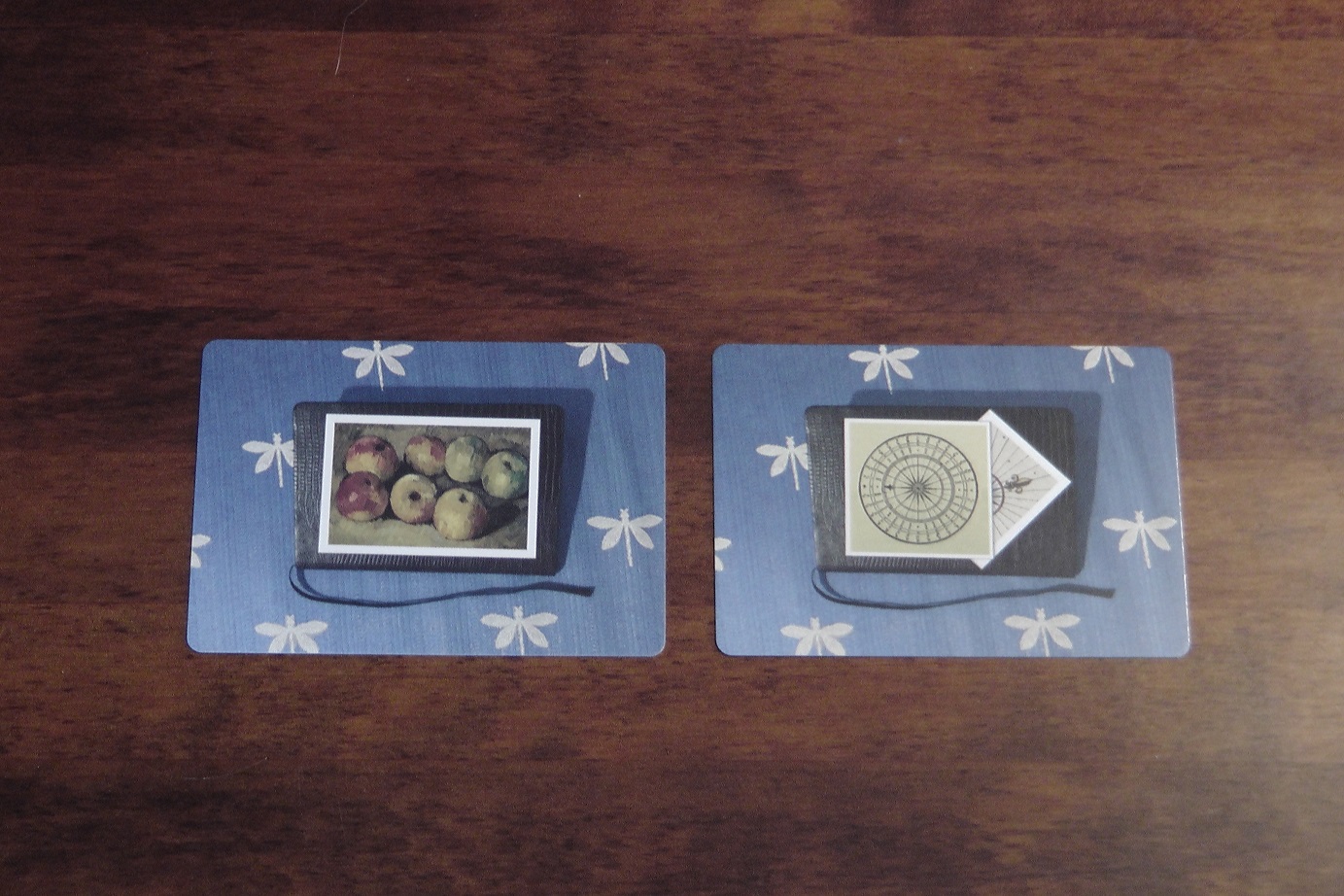 This section includes thoughts shared by some of our playing companions, not just my own.

Overall, we’ve enjoyed our time with Doctor Esker’s Notebook. The general feeling has been positive and it’s certainly been a different kind of experience. We would certainly recommend it for fans of these types of puzzles. It’s not without flaws but the designer is to be commended for designing something so clever and original. Check it out if this sounds like your type of thing.