AireCon has become a firm fixture in the convention cycle for Board Game Hub as it cements itself as probably the second-biggest board game convention in the UK. Of course I caveat this statement because it's difficult and time-consuming to get exact figures of convention attendances. Suffice it to say that the UK Games Expo is still easily the biggest in the UK, and one of the best-attended in the world now, whilst AireCon certainly feels like it's pushing ahead of the rest of the pack. Held every year at the Harrogate Convention Centre, the 2022 edition was able to go ahead with the inclusion of COVID passports and encouraged mask-wearing. Three intense days of tabletop gaming ensued... 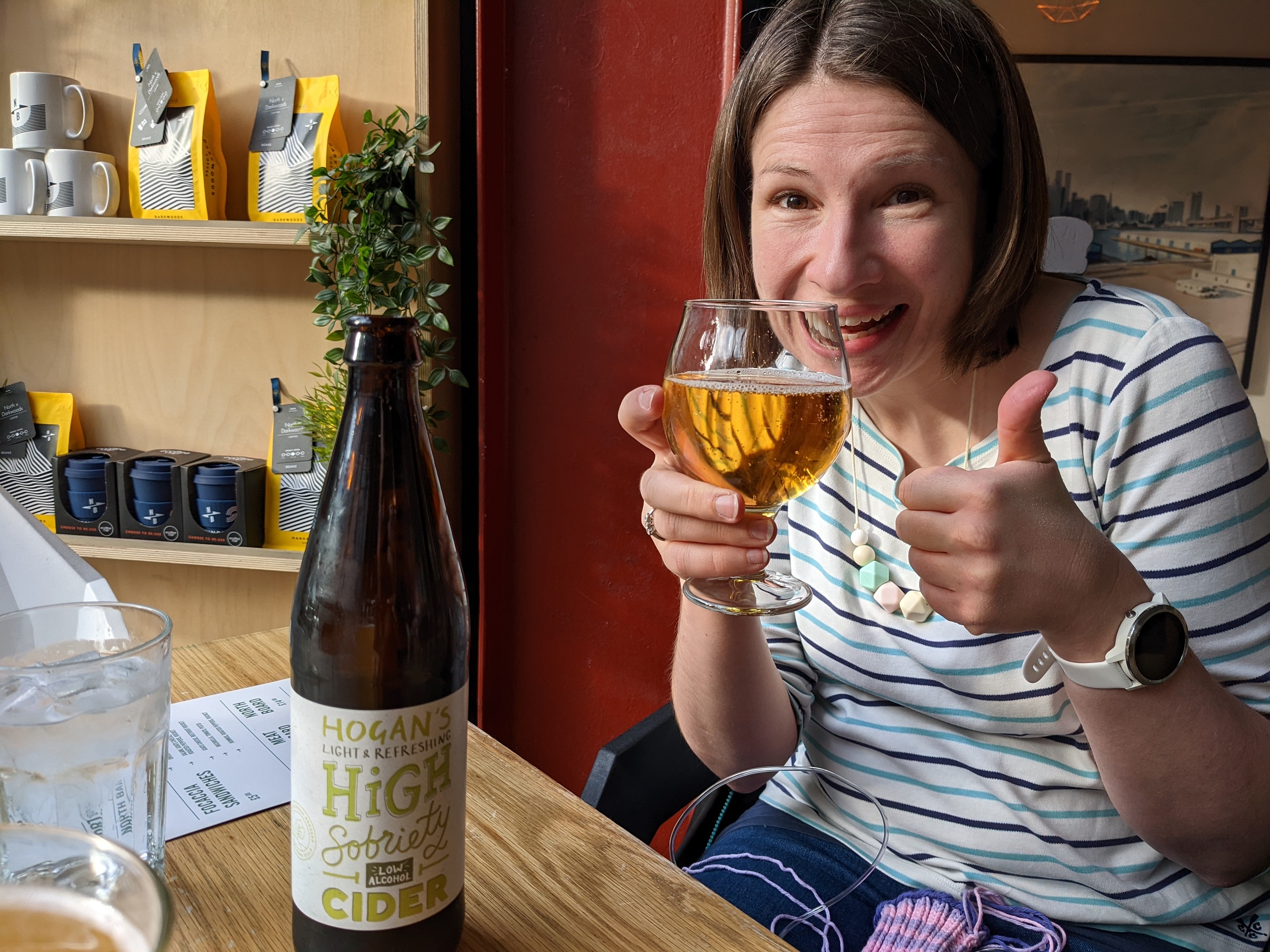 My amazing wife Emma who will probably kill me if she ever sees I included this picture. She's obviously very excited to be in Harrogate for AireCon 2022.

AireCon is a bit of a rarity in the UK because it caters to both open gaming (with massive areas of tables plus a well-stocked games library) and also to exhibitors. We joined ~70 exhibitors forming a mix of publishers, retailers and playtest areas.

This year we were able to demo/playtest a wider variety of games than ever before thanks to our expanding product line including Tusky Joe's Snorkel Adventure, Rift Valley Reserve, Tranquility, Tranquility: The Ascent and several other prototypes. There is nothing like getting your games in front of the public at conventions; the feedback is extremely helpful and genuinely assists us in their development. It also, of course, helps to grow our brand and increase awareness for the company and our games. 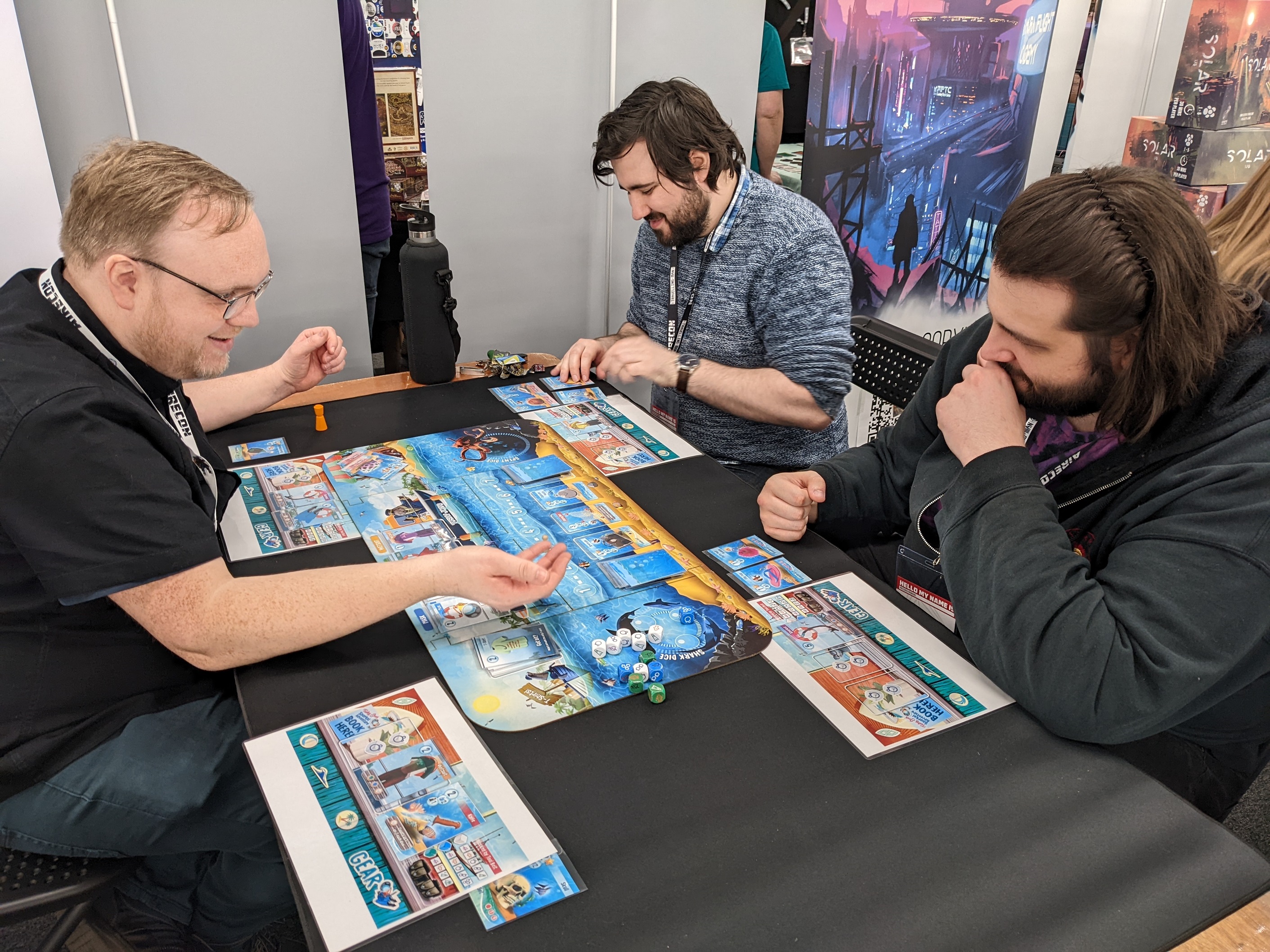 Away from the stand we enjoyed socialising with friends, new and old, playing new-to-us games such as Saboteur, Skull King, Kluster, So Clover! and Awkward Guests.

Who was in our team

We're very blessed at Board Game Hub to have so many people willing to demo and playtest for us and it's a huge privilege to have the physical support of our designers James Emmerson, James Hitchmough and Chris Backe at conventions. It was also amazing to have aspiring game designer Richard Woods with us; he was a tremendous asset and will get published one day soon, I promise you that!

Who we talked to

Another massive benefit for Board Game Hub, as a small company, is the kind of networking that AireCon facilitates. UKGE is manically busy (in a good way) which means that the amount of time you have to chat with people is unfortunately minimal in our experience. At AireCon we were busy but still able to meet and discuss with a range of people including other exhibitors, game designers, online acquaintances, representatives from manufacturers, Youtube reviewers, game shop owners and more. Big thanks to Tyler for our lovely brunch at Hoxton North and to Martin for arranging the Saturday evening industry gathering on behalf of LongPack. 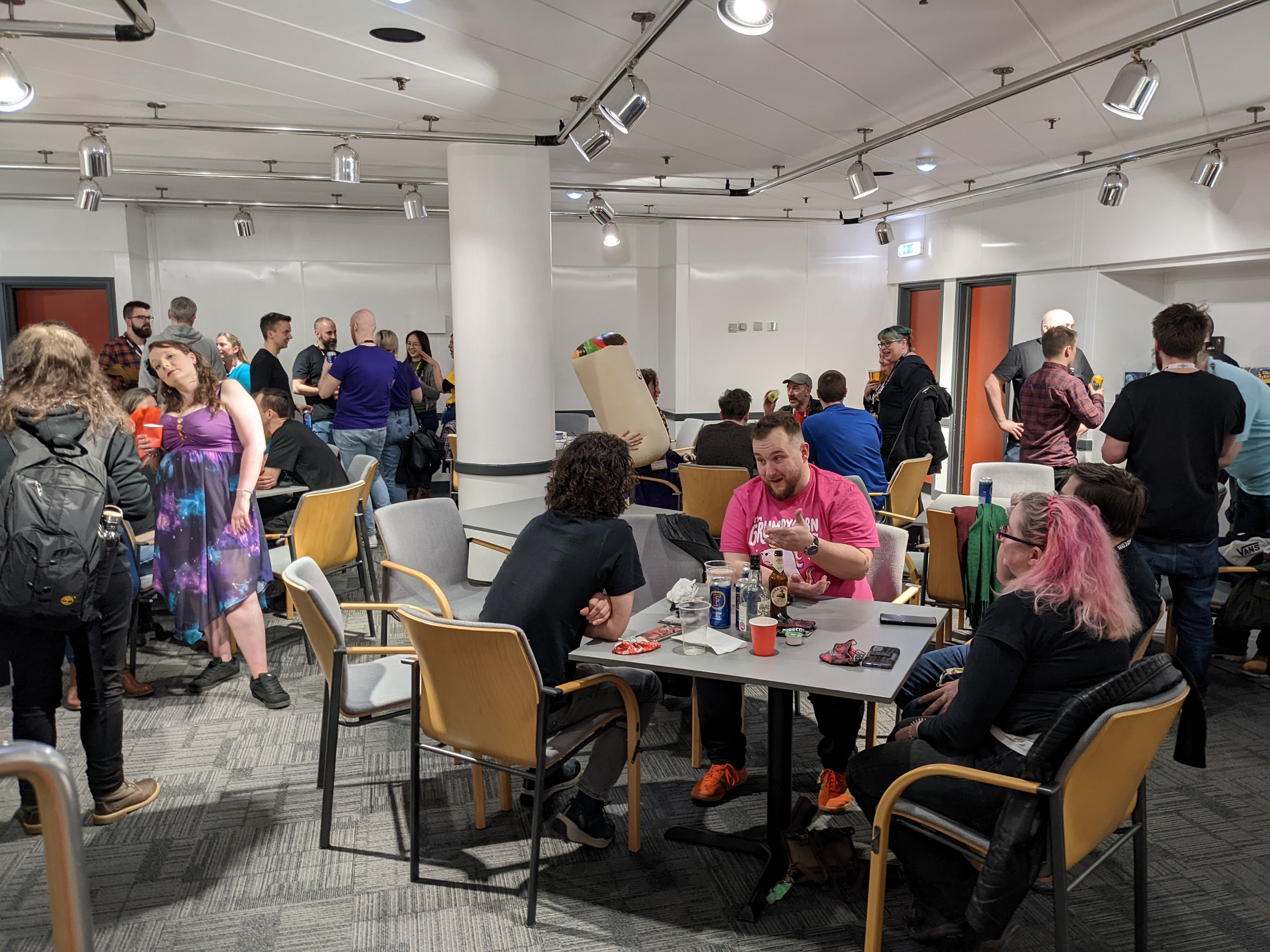 It was great to introduce Phil and Kirsty to some of the industry people we've come to know over the last few years (plus doing a quick interview with them about all things Board Game Hub) and getting to know about Nigel and the team at iMAGINATION GAMING. We're really excited to work with them as they continue to run their educational games programme throughout Britain and hope that Tranquility will become a valuable part of their events in the future. 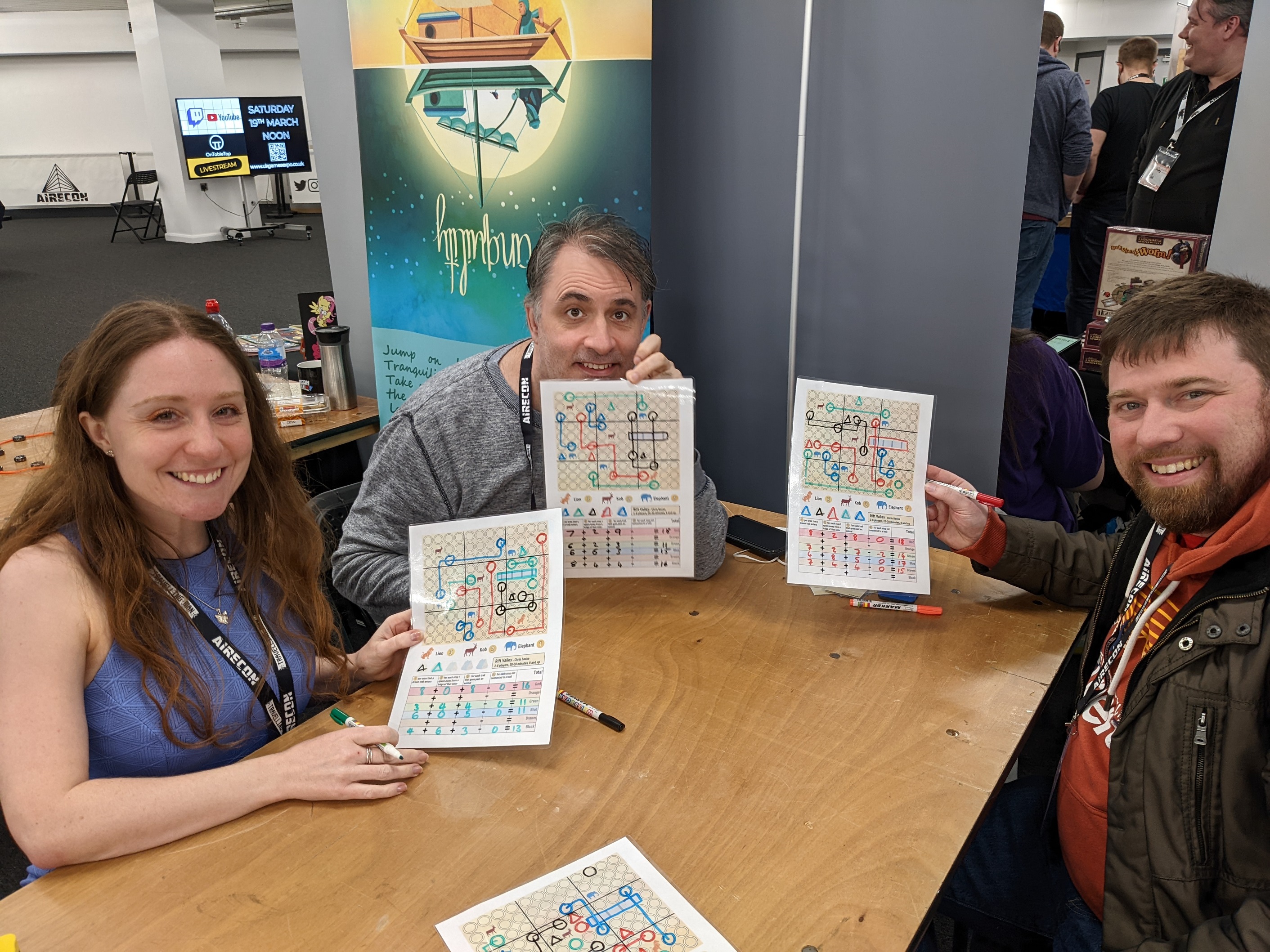 For the first time, thanks to our amazing team of volunteers, Emma and I were able to spend a bit of time away from the convention on the Saturday to enjoy a break from parental and company responsibilities. We took a trip to the lovely Knaresborough, watched some rugby and even spotted a lovely sign outside Games Crusade in Harrogate that rather made our day. 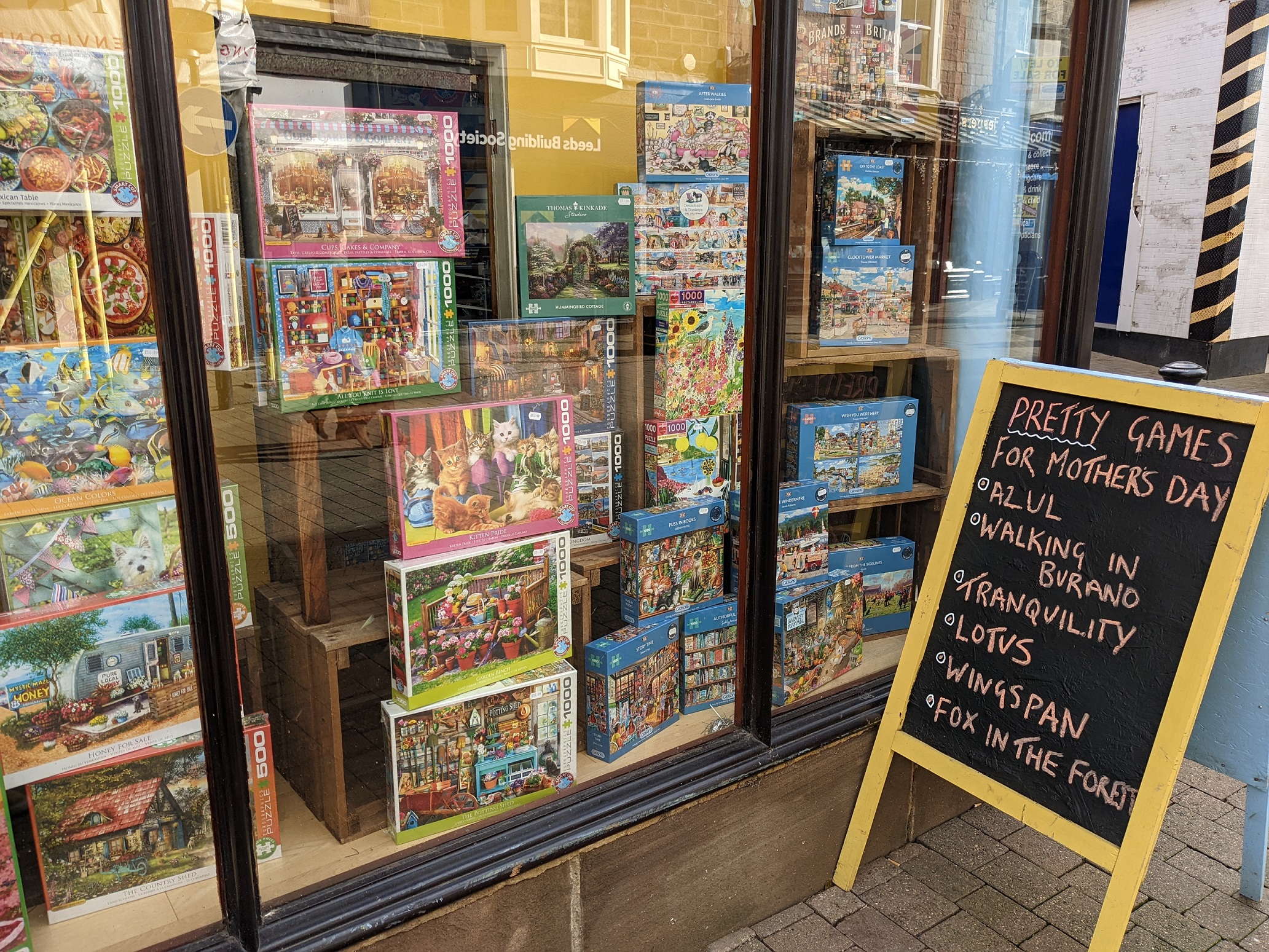 In the convention it was great to see publishers showing off their wares; we were neighbours of Cogito Ergo Meeple doing demos of Solar 175 which has just completed a Kickstarter campaign raising over £176,000 - late pledges will be available so you haven't necessarily missed the spaceship on this one. It was also fun seeing some of the other UK publishers including Paul Stapleton of Bedsit Games with Paupers' Ladder + expansions, Richard and Jane Denning of Medusa Games, Sinister Fish Games with their new title Moon, and of course Bez who, in the midst of demoing games such as A game about quickly grabbing creatures that are totally different and counting your turnips, handed over a free promo for my lovely copy of Wee Whimsical Creatures.

We fully expect to return to AireCon in 2023, 10th - 12th March, and can't wait to have multiple new games available for demoing and purchases. Who knows what Board Game Hub will have achieved in 11 months! Meanwhile, if you live in the UK but haven't yet made it up to Harrogate then we can only recommend getting along to AireCon next year. The team of volunteers is excellent, organised and personable, and the convention just goes from strength to strength.